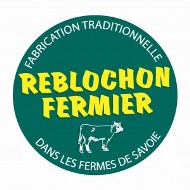 According to the regions and the varieties of cheese, the traditions of the farm dairy have remained the most important.
Farm made cheese represents today, less than 8% of the production of AOC cheeses, and less than 1% of the total cheese production in France.

For Saint-Nectaire, there are still 260 traditional farm producers.

The farm producers look after the animals, produce the cheese and sell it on the commercial market. Certain farm dairies group together to commercialise the cheese because they don’t have the time to go to the markets, and often the clients are outside the areas of production. The milk collectors-affineurs sometimes group together to produce several cheeses of the same region. This activity is particular to France, notably around the mountains (Auvergne, Savoy, the Pyrenees) but also in the regions where there are many farm producers (Bougogne, Loire…)

Other than farm made cheeses, there is artisan cheese, a very small production, done with the milk from the local cows.
There is also the cheese dairy production, this is made with the milk of several farms, but always in a determined area. This production is mechanised and larger, although it is not completely mechanised. In this category are village dairies (Gruyeren Mont d’Or) or the co-operative cheese dairies ‘fruitieres’ in French (Comté).

Finally, industrial dairies negotiate large quantities of milk and standardise the fabrication, often using pasteurised milk. This results in‘dead’ milk which looses its aromas and the diverse flavours of its ‘terroir’ of production.

This is why Maison Androuet defends, and has done so for 100 years, all of the small farm producers, in an effort to protect the legacy of the traditional cheeses.

AOC cheeses and other quality labels
See all chapters