Corsican cheese is a product assimilated to the cultural heritage of the island and its inhabitants.

The cheese has its place in Corsica, which is above all a land of shepherds: these men and women live in harmony with nature, sometimes hostile, but essential to their survival. Although the Corsican cheese manufacturing techniques evolve and change over time, the rules of life of these shepherds are regulated in the same way for decades and contribute to the quality of the cheese from Corsica of their profession.

The singularity cheese Corse is a land where everything that makes laCorse a unique island in the Mediterranean, also due to its heritage, a true reflection of its complex history. The history of Corsica reads in both the anthropomorphic menhirs of Filitosa or "Castelli" of the Alta Rocca, and in the Genoese citadels of coastline, the churches of Castagniccia with rich baroque ornaments or the ancient remains. The living culture of Corsica, perpetuated by centuries of customs finds its expression in voice, music and arts and crafts. The many rural fairs or cultural events taking place in Corsica become a showcase for a culture, a lifestyle and a craft that have almost disappeared, together with the company that carried them. Just like their island, the Corsicans had a mixed reputation. If the credits again, especially in the villages of the interior, a sense of hospitality, their suspicious and likely character of the Corsican made less reference. Tino Rossi serenades were right legendary "bandits of honor". And when in the night, rise the "paghjelle" traditional songs for three voices, it is the Corsican soul, proud and passionate that you will hear sing.

Rich in heritage, Corsica is also rich in living traditions where gastronomy including cheese holds a place of first order. The breeding and traditional agriculture provide, the seasons, the main island of the food production that made the reputation of Corsica. Also the seasons-they take their place in the expression of the art of living corse: gastronomy. A cuisine where authenticity of Local productions alongside the quality of the development of its products. The wines, some very famous, in defending the colors. A farming and agriculture, hunting and fishing in addition, according to the seasons, their share of flavors.

The Corsican shepherd is first a cheese. Milking is done differently for goats and sheep, according to the knowledge that the shepherds of animals: goats are milked in a round pen (mandria or presa) in which they can move freely. The shepherd of the sheep, he brings his flock in a narrow and elongated enclosure (compulu), in which the sheep are tight against each other. It starts at one end of milking compulu and gradually advance by passing the sheep behind him As he drafts.

The relationship goatherd (capraghju) to his animals is different from a beast to another: each is individualized by a name, and we know its behavior. Goats are reputed to be, as it should, more capricious, but also more attached to them a shepherd niolin saying says "capre the patron, has pecure rughjone" (goats are attached to shepherd the sheep on their grazing).

Once milking is complete, the shepherd curdle milk with rennet obtained from the milk of goats stomachs, smoke-dried, powdered and mixed with water. The renneted milk is cold, and quail in less than two hours. Then the curd is broken in order to get out the whey (seru), then poured into cheese molds (or fattoghja casgiaghja) braided ring (today they are, most often, in matters plastic) placed on a slightly dug and grooved board (or Scaffa tavuleddu) that collects the whey and leads to a tinned copper cauldron (paghjolu). The drained cheese are assembled two by two, thereby obtaining a cheese of regularly shaped hanging, cool, 800 g to 1 kg. It will be two or three times salted and matured gradually in a damp and cool cellar. In Sartenais, milk is curdled heat of 30 °, fresh cheese is pressed by hand in a wooden mold (scudedda) and refined on racks in wood smoke.

Once the cheese made, the shepherd passes manufacturing brocciu.

The brocciu is made from a mixture of whey and whole milk (puricciu) in the proportion of four-fifth of whey and fifth of whole milk. The whole milk was set aside before renneting. The whey is first heated only until the temperature of 50 °. It's dirty and there then added puricciu. The mixture is brought to a temperature of 75 °; fire monitoring is a delicate operation. The fire should not be too bright (Excluding why conifers among fuels), but it must be continuous.

When the temperature approaches 75 °, forms a white precipitate that rises to the surface of the mixture as it constitutes a light weight, smooth and supple, the shepherd carefully removes impurities brought by the wind (ash, dust) and that it gently deposited with an iron pallet on cane braided molds. The brocciu is then doubled, such as cheeses. The liquid flowing from the molds, or which remains at the bottom is called paghjolu ciaba. The shepherds give the pigs and they also use it when it is still almost boiling, to wash the utensils that were used to make cheese and brocciu. It's about the whole party to be drawn from the ciaba.

The brocciu can be eaten fresh, the same day of its manufacture, or stored: in this case, the dirty, like a cheese. All the cheese-making operations and brocciu occupies about two hours, to which are added the two hours needed for curdling milk, during which the shepherd takes care of refining: washing and salting the cheese brocciu and already in the cellar.

The old shepherds say it is necessary to make a good cheese Corsica, to take in hand (manighjà) at least every two or three days.

Corsican shepherds rarely butter though they know doing so; Traditional Corsican kitchen uses only olive oil and lard. It also consumes quite frequently, the curd and cheese at all states of manufacture: fresh; unsalted; to salty sentence; "Done" (fattu), after 5 to 6 weeks; or old (vechju), after several months of refining.

Corsican cheeses are varied: to establish a complete list would be difficult; we can at least distinguish, among the best known cheeses originating from Calenzana, Niolu to Venacu, which are all soft cheeses; the Sartenais is a pressed cheese. The brocciu is known in all Corsica; in Sartenais were once manufactured a kind of curd called ricotta that produced by throwing in a whole milk bucket few large heated rollers, until we produces boiling milk. When milk is again warm curdling is done, and we get the ricotta Corsica.

We can not talk about making cheese, Corsica, without mentioning has taken place in the pastoral economy, since 1899, Roquefort cheese industry. At present, 90% of sheep milk production, representing almost all herds (about five cents) are treated within six roquefortoises dairies located in Corsica. They export to the continent each year from 1200 to 1300 tonnes of cheese in fourmes, who will finish their maturation in the Roquefort caves.

The milk collection period runs from October to late May. In June-July, the mountains, the sheep shepherds make traditional cheese for their own consumption and sale in the local circuit. Corsica production represents approximately 10% as the total production of Roquefort.

Cheeses by regions
See all chapters 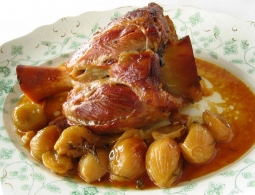