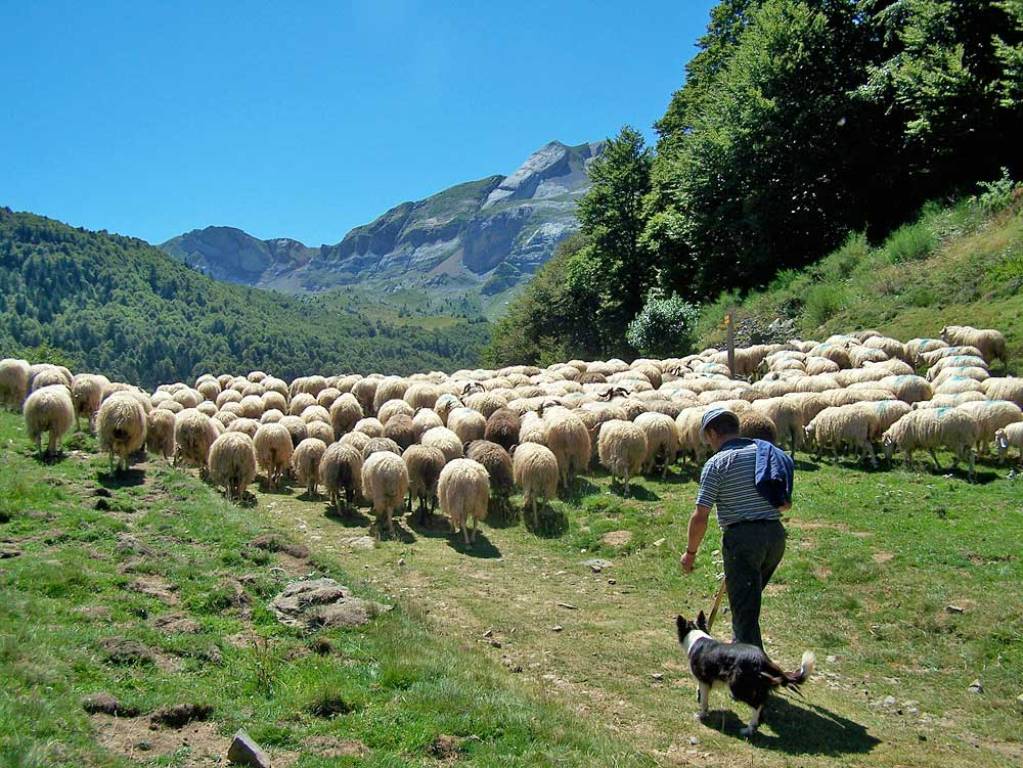 Although ewe’s milk was consumed directly in ancient times, today it is used principally to make cheese and yoghurts. The ewes have only two udders and produce a lot less milk than cows.

However, as ewe’s milk contains lots more fat (75g the litre against 35g a litre) and more dry matter than cow’s milk, it is therefore very useful for making cheese. It resists contamination when it is cooled as it has a high level of calcium.

The most well-known ewe’s milk cheeses are Greek Feta, Roquefort from France, Manchego from Spain, and Pecorino romano and Ricotta from Italy. Certain yoghurts are made with ewe’s milk cheese. Lots of these products are now made with cow’s milk, especially when they are made outside of their region of origin.

Ewe’s mil contains 4.8% lactose which means that is is not recommended for those who are intolerant to this sugar.

These sheep produce a larger quantity of milk over a longer period. The difference of the quality of the milk is due to the levels of fat and protein, but not the level of lactose. The best dairy breeds produce 150 litres of milk for 180 days. Some of the milk is transformed into some of the most well known ewe’s milk cheeses; Manchego from Spain, Roquefort from France and Feta from Greece.

The principle breeds are:

- The Basco-Béarnaise : reared in the Bernaise area of the Pyrenees and in the French part of the Basque Country. It is a dairy ewe, from which is made AOC Ossau-Iraty cheese and Tomme de brebis des Pyrenees cheese. It can make 120 litres of milk in 130 days of lactation, where the milk is rich in fat and protein.

- The Manech: has a black or reddish head, it is native to its Pyrenean region, and is particularly familiar with the Basque countryside.

The Lacaune : an excellent breed from Aveyron from which the famous Roquefort is made. Its name comes from the county town of the canton situated in the middle of the Lacaune mountains in Tarn, at the border of Herault and Aveyron.

Characteristics of the breed:
Head: quite fine, slightly long, the front is slightly rounded, wide and small, covered with white hair, large eyes, long ears, slightly low on the head, no horns.
Neck: round without a fetlock.
Trunk: robust and long. Deep chest , cylindrical, long tail coming to the top of the shin (when it has not been docked).
Limbs: average length, well proportioned.
Skin: white coloured, some pigmentation is accepted.
Wool: covers the animal, leaving the head, the nape of the neck and a delicate décolleté, white coloured, dense texture, short hairs, fleece is of average weight.
Size and weight: heavy. 70 to 80 hands in size. Average weight of the adult females is 70 to 75 kg (minimum 60kg) and the adult males weigh between 95 and 100kg (minimum 80kg).
Eliminatory flaws: cinched chest, ogive shaped withers, animal is too high on its legs, too many black markings.

The Corsican Ewe: transmits the long pastoral tradition of the Island of Beauty. Sanson considered the Corsican breed as “destitute variety form the Pyrenean group.” What is certain is that for centuries, the climate, weak resources of food and the mode of life are modelled on Corsican ovine and explain the setbacks in trying to improve this breed using other breeds (Merinos, Dishley, Barbarin) in the 19th Century.  Boyer and Sajous report that in 1922, the dairy production of the Corsican ewe was equal to that of the ewes of Lacaune, distinctly heavier. This equivalence does not exist any more, but the question still posed by the breeders is if they wish to increase their productivity in introducing rams from the Sardes breed, considering the constraints of the difference of pastoral systems.

Characteristics of the breed:
The homogenisation of the population has established the characteristics of the Corsican breed. The following description is taken from  Doctor Romani (The Technical Dairy review n665):
Animal of reduced size: the size of the ewes varies from 0.50m to 0.60m, with a living weight between 30kg and 40kg, where the carcass weighs 13 to 20kg. The size of the male reaches 0.65m for a weight of 50kg.
Head: very fine, long, flat nose or slightly hooked, more hooked in the rams, a tuft of hair on the forehead. Small ears, low on the head and often horizontal. Often no horns on the females, if they are present they are small, thin and flat. On the male they are spiralled. The colour is varied. Black or a pinky colour if the fleece os grey or white.
Body: regular, developed thorax, straight back, small shins.
Tail: long and fine (30 to 35cm)
Limbs: very fine, white or brown hooves.
Udders: well developed, like goats udders.
Wool: variable fleece, being white (50%), black (30%) and grey, reddish or cinder coloured (around 20%)
Ewes that are completely white are rare. The fleece is very open; there is no wool under the neck, on the limbs or the stomach. It weighs between 1kg and 1.2kg and is composed of thick wool; it can be used for rugs and mattresses.
The Corsican breed is defined by its small size, rustic character and ability to produce milk. It is agile and can good at walking; it lives outside in arid areas and Mediterranean mountains. It is used essentially for the production of local cheese, such as the AOC Broccio cheese. A part of the trait is exported to make feta. The Corsican race is the only European breed with such a variety of colour in the fleeces.

-The Préalpes du Sud: has the rustic qualities required to resist the heat, to use the paths and garrigues of the mountains of southern France. An animal which is capable of breeding quickly.

Characteristics of the breed:

Head: fine, long, largish forehead, slightly bowed. Nose is larger at the top than the bottom, slightly hooked in the males less so in the female, with a characteristic depression where it meets the forehead.  Fine ears, quite long, low on the head. No horns.
Trunk: large chest, rounded sides
Legs: thick and short
Milk characteristics: well developed udders, good for milking.
Pigmentation: absence of pigmentation, in particular on the face, the hooves and around the mouth.
Size and weight: average size, 0.6 to 0.7 hands for the ewes, more for the males. Average weight for an adult ewe is 50 to 70kg, and 75 to 100jg for the ram.
Desired characteristics: animal is close to the ground, short udders.
Colour: white
Texture: dense fleece with an average weight of 1kg.
Eliminatory flaws: does not conform with the standard fleece, non-homogenised, not dense.

At the border of the departments of the Drone and Vaucluse, on the Jurassic and cretaceous hills of the region, there has been an ovine population for centuries, which is said to belong to the sheep of the Pyrenees. The land and the climate contribute to the similarities.

Local associations were created to increase the population of the ewes and in 1947 the ‘Flock Book Savoumon-Sahune’ was created. Which developed into the ‘Flock Book of the Ovine race of the Southern Prealpes’  in 1948, which directed the selection of the breeds.

It is noted that ewe’s milk cheese is still essentially only a speciality of the South west and South east of France and that the ovine livestock is present mostly on the Pyrenean massif, in Aveyron and in Provence

From Milk to Cheese
See all chapters