The Picodon Dieulefit cheese is a soft goat's cheese with a natural rind produced at Dieulefit and in the outskirts of Montélimar in the department of Drôme. This cheese is one of the Picodon cheeses to be protected by an AOC since 1983. The Picodons de Dieulefit were the first Picodons to arrive on the market in Paris of which the notoriety gave the name value and superiority. The cheese takes the shape of a small, irregular, round quoit, with a diameter of 6 to 8 cm and a thickness of 2 to 3 cm, with a weight of 80 to 100 grams. It can be enjoyed as a quick-lunch or at the end of a meal.

Three phases are necessary to mature the Picodon Dieulefit. First, the cheeses are left for 15 days in the humid cheese cellar in crates, to increase the development of the mould on the surface of the cheese. The second phase consists of two steps, the first is to wash the Picodon with clean water to eliminate the mould and the second step is to rehumidify the cheeses to achieve a  more pronounced flavour. Finally, the Picodons are again put in the humid cheese cellar for 8 days in order to mature further. 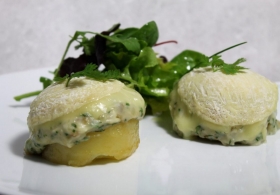