The name of this cheese derives from a word from the Cévenol dialect; "pébre" meaning "pepper" due to the light spicy flavour of the cheese. Pélardon is a generic term given to several varieties of the same type of cheese which come from several areas of the Languedoc region. It is often confused with "Picodon" which is the specific term reserved for the small cheeses of the Haut Velay, the Nyonais and the Tricastin. The Pélardon cheese was acknowledged as Appellation d'Origine Controlée, (AOC) (meaning designation of origin) in 2000.

This cheese is in the shape of a small, irregular,  round quoit (puck)  which weighs around 80 to 120 grams. It is matured for 2 to 3 weeks.

History of the Pélardon cheese.

The origins of the Pélardon cheese date back to the antiquity, where the naturalist, Pliny the Elder wrote about the "Péraldou" and indicated that the cheeses of the Languedoc were known around even the most prestigious  tables in Rome. The Pélardon cheese is also regularly mentioned elsewhere throughout the centuries. It was in the 18th century, more precisely in 1756 that the abbot Bossier de Sauvages dwelled upon the definition of the cheese called PERALDOU, and shaped as a small, flat, round cheese, made in Cévennes.  Frédéric MISTRAL  went one step further in his Provençal-French dictionary, where he defined the cheese as a small, round cheese made from goat's milk, with a mature, spicy flavour, which comes from the Cérvennes. There are many synonyms; (Pélardon, Paraldon, Péladrou, Péraudou), but the name which stands the test of time is Pélardon which, from the end of the 19th century was employed across the board for this type of cheese. In the last few centuries, the production of Pélardon hardly developed at all. Firstly, this was due to the fact that that the goat was seen as the cow of the poor people and so its products were not sought-after by the rich clientele. Secondly, the products of the goats were destined for consumption by the families who owned them. Due to the way it is made, the Pélardon cheese is not suited to long periods of presevation or transport; at least not for the connoisseur with a refined palate, like the ancestors of the Cévennes and the Langeudoc. At all times, the goats and sheep have always lived together because these two species provided milk, meat and cheese for the people of the Cévennes. The cheese regained popularity from the 1970s when new producers, often coming from the city, developed production and made it more dynamic. 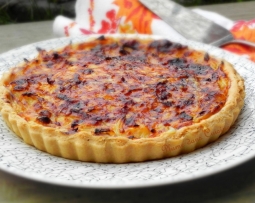