Corsica is located about 200 km southeast of the Riviera, west of Tuscany and northern Sardinia. Rather wooded and mountainous island, the southern coast of Corsica is formed high cliffs (Bonifacio). The shortest distance between mainland France and Corsica, Cap Martin at the forefront of the Revellata, is 160 km, and Corsica is located less than 90 km from the Italian mainland. Corsica lies with Sardinia on a continental microplate separated from that of France or Italy, and called corso-Sardinian block.

The distance between the northern and southern point of Corsica is 182 kilometers. Corsica is a small rock swung in a world cut in two. Top, past and his memories (vendetta, maquis), below, the sea. The gods of the Mediterranean could settle on holiday. Corsica is also the birthplace of a long battered by history community. A Corsican people who suffered from invaders and isolation. Daughter of the "mother" Mediterranean, Corsica has managed to benefit from all the influences of the Basin. "Mixed" mental and cultural, Corsica does not deny the loans she has made.

Lasts and tragic, secret and wild, Corsica will never just an area of ​​more on the map of France. Nothing that is rational in Corsica: no relief nor the climate, nor passions nor houses. The Corsican beaches are paradisiacal course, the ultra-secret coves and steep mountains, rugged. Corsica is a mixture of rock and pleasure, austerity and remote island of perfumes. Clinging to the mountain, isolated in the bush, stone houses and slate are home to many family secrets that vendetta memories. The maquis: the deep Corsica! This wild pigs and cows release, fountains roadside, long winters that manufacture, away from the hustle and bustle of the summer, coppa, figatellu and chestnut flour. Arbutus, mastic, myrtle, lavender, cheese and many other delights still inhabit this hard to penetrate Corsican world.

Corsica is an island in the Mediterranean Sea and a French region, however with special status (officially "Corsican regional authority"), consisting of two departments: Corse-du-Sud (2A) and Haute-Corse (2B ). She was independent 30 January 1735, then it became French May 15, 1768 by the Treaty of Versailles. Corsica had the national anthem Dio Vi Salvi Regina. It is now called Island of Beauty. The Greeks called Kallisté (Ancient Greek Καλλίστη: "the most beautiful").

Agriculture in Corsica remains the largest productive sector despite its small share in GDP. One can not understand the current situation without knowing a minimum agrarian history of Corsica. Traditional food systems disappear in the early twentieth century under the combined pressure of competition from new countries cereals and unfavorable tariffs. These systems were based on the cultivation of dry grain on terraces with biennial fallow or slash and burn in the event of a food crisis, an extra crop treated (gardens, vineyards, orchards) and a farm "inverse semi-nomadic" combining wintering plain lands and mountains with summer mountain village (Niolu, Alta Rocca, Ascu, etc.). Some regions Corsican replace cereal crops by the chestnut. At the turn of 1945, the interior is ruined beyond Corsica, in full rural and agricultural decline. The Corsican landowners have often migrated. Occurs at 10 years apart both of which will draw the current agricultural landscape: the development of the eastern plain of Corsica and the reconquest of the interior by agriculture and pastoralism.

In Roman times, the inhabitants of Corsica spoke a still very close to that of the Latin continent. Put simply: we note that the Corsican language is an issue of language Low Latin and medieval Tuscan. Some varieties of the Corsican language are among the closest standard Italian language, as they were largely influenced by the Tuscan (itself the basis for the Italian). This makes mutual understanding with the Italians is excellent but hard to understand someone speaking Corsican dialects of Italian as the Calabrian, the Venetian or even Piedmontese -and vice versa. The Corsican anthem "Dio Vi Salvi Regina" is also written in standard Italian and sung in Corsican without major changes are noticeable between the written and oral; the only difference is that the Italian o becomes u Latin Corsican (even the title is sometimes "Diu vi salvi Regina"). This phenomenon of interchangeability of u and o is not however a specifically Corsican since the phenomenon found in Sicilian, in Calabria, Occitan, Catalan and Portuguese. However, the varieties of the Corsican language called "taravaise" or "sartenaise" are furthest from the Tuscan but considerably closer to the Sicilian or galluraise languages.

Discover the Corsican gastronomy reports to the gourmet journey! Corsican cuisine is a cuisine that combines authenticity, tradition and imagination. The products of the Corsican soil: olive oil, chestnut flour, delicatessen, honey, brocciu, cheese, are the guarantors of the subtle and incomparable taste of the Corsican gastronomy. The recipes handed down from generation to generation Corsican views were interpreted by our chefs for the greatest pleasure of gourmets. Corsica is reputed for the quality of its productions and its dishes prepared with products from a terroir with strong identity are living up to their reputation.

We invite you to a tourist ride to discover the Corsican cheese :

Discovering the terroir
See all chapters 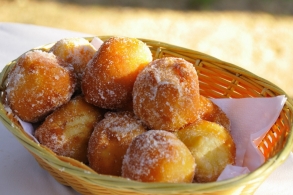 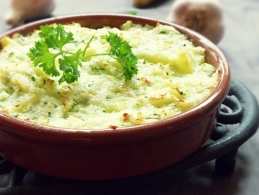 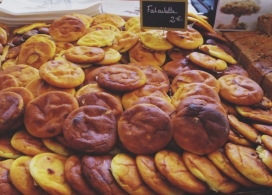 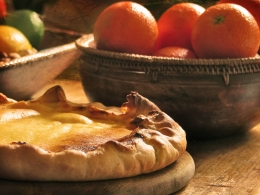