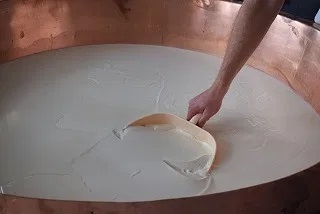 The first stage of the cheese making process is the curdling of the milk.

To curdle the milk, firstly it is solidified by natural acidification from the ferments it contains. The milk goes from being a liquid to being a solid. Milk curdles naturally at room temperature.

Nevertheless, natural ‘accelerators’ can be used to curdle the milk. Rennet is an enzyme found in the stomach of young calves fed exclusively on milk, which curdles the milk.

The curdling of the milk happens depends on the type of cheese desired:
- Fresh cheese and goat’s cheese: milk is curdled without adding rennet
- Cooked Pressed cheeses: rennet is predominantly used to curdle the milk
- Soft or blue cheese: curdling is done using a mix of lactic ferments and rennet

During the curdling, the milk takes on a gelatinous texture, like flakes which spontaneously drain the liquid. The milk can also form into a sort of paste when rennet is added, which then has to be broken up.