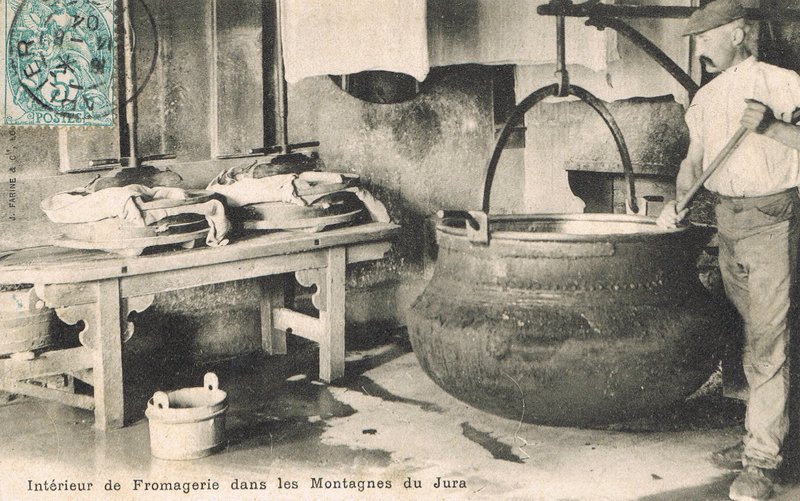 Cheese was still a substitute for meat , because of its price. It did not appear definitively on the tables of the French until just before the 19th Century.

As in this first declaration;
“A dessert without cheese is like a beautiful woman who is missing an eye.”

And this second declaration, at the Congress of Vienna in 1815, with regards to the Brie de Maux;
“Prince of all cheeses and king of desserts.”

It is not until the Empire that cuisine and gastronomy bloomed under great classic cooks. It was in this era that the saw the first gastronomic writer: Alexande-Laurent-Balthazar Grimod de la Reynière.

Reduced to small portions after the extravagance of the century before the Revolution, he founded a “Tasting panel” which joined with the most celebrated restaurant “Au Rocher de Cancale.” It gave raving reviews to those who sent their products for the title of “recognition.”

On the other side of the Atlantic, Canadian cheeses were artisan made in small quantities, even when they were exported from the 19th Century.
Then an American, Hervey Farrington, invented the technology to produce the cheeses in large amounts. To take the large quantities of milk which were needed, he went around the farms of Ontario and convinced the farmers to abandon their artisan production ad let him take the milk from their cows. This is the way in which the first industrial cheese production began in Ontario, under the name The Pioneer, in 1864. Within three years, the number of small cheese dairies increased at an surprising rate.

In 1867, the year of the Confederation, there were 200 dairies in production in Ontario only. It was in Quebec that the first cheesemaking School of North America opened. In 1881, in Saint-Deni-de-Kamouraska, a man named Edouard André Barnard entered started history by transforming his barn to receive students.

At the dairy school of Saint-Hyacinthe, opened in 1893, the pioneering ideas which were more and more inventive advanced the research of the fabrication of cheese. As the first dairy school on the continent, Saint-Hyacinthe allowed the improvement of the techniques of centrifugation, pasteurisation, curdling and cutting of the curds, as well as advancing research in chemistry, bacteriology and nutrition. On of the first countries to apply the techniques of pasteurisation systematically was Canada, it was also the first to introduce strict legislations on the criteria of cleanliness and hygiene governing the gathering of the milk and the fabrication of the cheeses.

In 1893, the minister of Agriculture issued a challenge to twelve Ontario producers: make the biggest cheese in the world!

The history of cheese took a big turn. Louis Pasteur discovered that micro organisms provoked the fermentation of certain foods, notably milk, and that the bacteria can be destroyed with the use of heat. From 1857 to 1867, he published his studies on fermentation (lactic, butyric) where it had not been realised as to what the yeast was made up of and how the substance worked (the argument from Liebig) in which they are in fact living organisms.

He discovered an unsuspected fact; the capacity in which certain organisms can live without free oxygen (in other words the absence of air). He called these organisms’ anaerobes.
In this way, in the case of alcoholic fermentation, the yeast holds to keep out the air in provoking in the sugar deposits, a chemical reaction which liberates the substances which are needed and provokes the creation of alcohol.

In 1863, it had been some years that the illnesses of the French wines gravely effected commerce. Napoleon III demanded Pasteur, specialist of fermentation and purification, to find a solution. Pasteur proposed heating the wine to 57° to kill the germs and resolve the problems of conservation and transport; the pasteurisation. This created a quarrel involving the  oenologist Alfred de Vergnette de Lamotte, where the scholars Balard and Thenard took the side of Pasteur and Vergnette respectively.

Pasteur and Vergnette were preceded by Nicolas Appert. The discovery of the Pasteurisation led to Pasteur being awarded the ‘Mérite Agricole’ award.

The pasturisation of wine, although the blind tasters concluded that it did not alter the bouquet, was abandoned in the period due to the Phylloxera crisis (end of the 19th Century). The pasturisation of milk, on the other hand, of which Pasteur had not thought of (it was the German chemist Fran von Soxhlet, who in 1886 proposed the pasteurisation of milk), was implemented on a permanent basis.

Pasteur created the basis for pasteurisation, and his disciple Emile Duclaux adapted this process to cheese some years later thanks to the “pasteurisation” (the industrial process of destroying the bacteria at high temperatures), the 19th Century was the period of the revolution of the world of the cheese maker, who would develop and diversify to enter into a new area, that of the industrial cheese maker.