The Bleu des Causses cheese takes it name from the place where it originated and its characteristics, the fact that it is a blue cheese. Made in the regions of Sainte-Afrique and Millau, the Bleu des Causses is an example of an imitation of Roquefort, made with cow's milk in the less arid regions than the Causses.   The central geographical area, situated in Aveyron in the regions of Segala and Levezou, have a low, dry terrain where a large part of the base comprises of magmatic and metamorphic rocks.  The surrounding area is more diversified where some parts are more elevated and contain more water, these areas are Aubrac, Margeride and Grands Causses. Aubrac  also has a volcanic terrain.

The name of this cheese  seems to suggest that it is produced on the Causses. In fact, its name comes in a large part from the way it is matured in the natural caves which are effectively situated in the limestone of the Causses.
Like Roquefort, the Bleu des Causses cheese is matured in the Fleurines. It has been protected by an Appellation d'Origine since the decree of the 21st May 1979, which was modified on the 28th January and 4th August 1980.

The Bleu des Causses cheese is in the shape of a cylinder and weighs between 2.25 and 2.5 kilograms. It is matured in the natural, humid holes in the rock.

The Bleu des Causses cheese with its abundance of rich aromas  reminiscent of the  Causses and the rich meadows of the north of Aveyron and the Lozère, can be eaten all year round and enjoyed as part of any course, from the aperitif to the dessert. Sitting proudly on the cheese board, its flavour is lost when used in cooking, and is best appreciated simply, on a chunk of rustic, nutty bread. As it is matured in a cool, humid  cheese cellar, the Bleu des Causses cheese prefers sunlight, especially that of its region of origin. To conserve the cheese for as long as possible, it is best wrapped in aluminium foil and placed in the lower part of the fridge, but it should be taken out of the fridge an hour before serving. The Bleu des Causses cheese should be cut vertically  in two halves, and then these halves should be cut in half again but horizantally. On a cheese board, it is best presented as a quarter or an eighth sized portion. There are a number of wines which marry perfectly with the Bleu des Causses cheese, but wines which harmonize particularly well are those that are naturally sweet like Muscat and certain syrupy wines like the Côte de Bergerac.

The history of the Bleu des Causses cheese

South of the Massif Central, in the old provice of Rouergue, from time immemorial there have been small artisan dairies and cheese-makers dispersed on the Causses, making a blue cheese, the same type as Roquefort but made using cow's milk, or a mix of cow's and ewe's milk. There are numerous documents that record that these blue cheeses, which were not yet called "Bleu des Causses" were produced in natural north facing caves hollowed out in the heaps of fallen limestone, where currents of fresh and humid air blew through. The farmers and cheese makers of the Causses had measured the beneficial effects of these conditions on the quality of the cheeses.  The production of these cheeses particularly developed  after the adoption of the law of the 26th July 1925 which defined Roquefort cheese, reserving the name exclusively for those cheeses which were produced with ewe's milk and matured in the caves at Combalou.  As a result, the blue cheeses made with cow's milk and matured in the caves  situated just outside the village of Roquefort were obligated to define their characteristics in order for them to be differenciated. In November 1932, the "Groupement Syndical des Fabricants de Fromage de l'Aveyron" meaning 'the United Association of Producers of the Cheese of Aveyron" was formed, which, in 1934, became the "Groupement Syndical des Fabricants de Fromage Bleu de l'Aveyron" "the United Association of Producers of the blue cheese of Aveyron." This made the name "Bleu de l'Aveyron official and brought in a collective label and a brand entitled "VALMONT." Progressively, as the rules concerning the blue cheeses were further defined, the Bleu de l'Aveyron  gave way to the Bleu des Causses, which was successively defined by the decree of the 4th December 1941, and later by the decree of 29th October 1946. The first Articles of Association of the "Syndicat du Bleu des Causses" were layed out in July 1941. In November 1953, the tribunal of Millau acknowledged the Bleu des Causses as appelation d'origine (designation of origin) which defined the conditions of the maturing process and the geographrical area where the maturing process takes place. The decree of the 8th June 1979 recognised the appellation d'origine of the Bleu des Causses and specified the the area where the milk, which is used to produce the cheese, should be collected. The "Syndicat de Défense du Bleu des Causses" as it is known today, was started in 1962. At the time, it regrouped the producers and affineurs only but since 1992, it also included the producers of the milk. 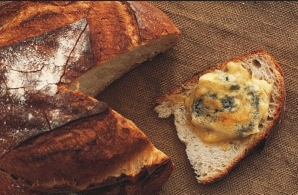