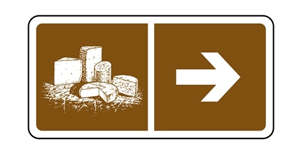 02. The etymological roots of the word 'fromage' (cheese)

The origin of the word “fromage” comes from the 13th Century. At the time, the milk was curdled in a container with perforated sides to facilitate the draining of the cheese; these containers were called ‘faisselles’. In Latin, ‘faiselles’ is translated as ‘forma.’

From the 14th Century, the word ‘forma’ became ‘fourmage’, then in the 15th Century; ‘fromaige’ became ‘fromage.’

It is therefore the container, and the fact that the curds are ‘formed’ in French; “mettre en forme,” that the word ‘fromage’ came about. The original etymological and historical meaning of the name conveys the importance of the transformation and preservation of the milk.