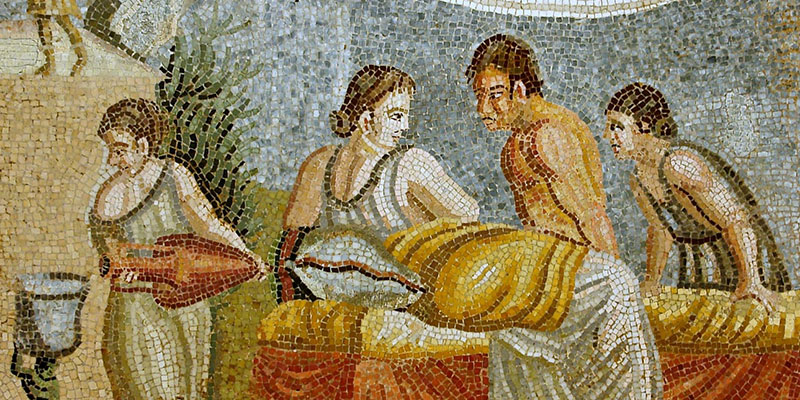 04. Cheese at the time of the Ancient Greeks and the Roman civilisation.

This stele is a block of black basalt on which was meant for the infamous spoken code of Hammourabi which is one of the most ancient accounts from this time. The inscriptions, in wedge shaped characters, stayed mysterious for a long time, but now it is known that the principle foods sold by markets were controlled by taxes.

Other than cheese, there is a particular mention of solid bread and “liquid” bread which was in fact beer. The Babylonians knew that the yeasts used in the fermentation of the two products was the same.

Following the chronolology, the second written account was made by Homer, who, in The Odysee, tells of the Cyclops Polypheme  in Homer’s den, which is identified later as the ‘forge du vulcain’ ans is today the underground caverns of Vesuvius. Elsewhere, Homer tells ‘that is comes from goats cheese’

Cakes made of cheese are mentioned several times in the writings of the ancient greeks, especially by Athenea who writes about the ‘kinés’ garnished with honey.

Greek mythology as well as the New Testement mention the existence of cheeses. The word cheese appears in the Bible when Job addresses God.

In ancient Greece, evening meals were made up of curdled milk and cheese. The techniques that were used to make the cheese were close to those used today.

The Romans enjoyed uncooked cheeses, or cooked with olive oil and sweet white wine. Columelle explains in his feature about the agricultural economy, about the process of fabrication using the curdling of milk and the adding of rennet, the pressing of the curds, the salting and the maturing. He recommended that the milk was curdled using young veal stomachs   and the sap of the fig tree.

Columelle underlined the importance of the salt in the fabrication, which more to his taste, dried the cheese and conserved it.

The writer Pliny the Elder devoted part of his encyclopaedia ‘Natural History’  to the description of types of cheese which were appreciated by the Romans in the First Empire.  Pliny makes reference to cheeses from all over France, as well as cheeses from Bithynia and Asia Minor . He affirmed that the best cheeses came from the villages of Nîmes, and that goats cheese was very popular in Rome for their different taste.

Pliny also writes in his ‘Natural History’ in chapter 11, ‘De diversitate caseorum’, a ewes milk cheese from the Lozère, which was like Roquefort, as well as the cheese moulds from Arvernes abd Gévaudan.

Cheese was part of the daily ration of the legions of Cesar, especially Parmesan and Pecorino. Cesar himself liked a blue cheese from South Africa, near Roquefort-sur-Soulzon.

The ration of the Roman legions was fixed by Hadrien at arounf 30 grams a day. Cheese was also recommended to cure dysentery.

The impressionable network of communication set up by the Romans influenced communication and language. ‘Caseus’ which is latin for cheese, gave birth to the word ‘cacio’ in Italian, ‘Kase’ in German and ‘cheese’ in English.

English cheddar is like French cantal, a pressed, incooked cheese. Both cheeses are closely related by their origin; it is thought that it was the Romans who took the cantal recipe over to England, where it was adapted to make cheddar. Therefore cheddar can be considered as a Cantal’s distant English cousin.

The Romans, who consumed lots of cheese, thought to stock pile cheese for winter, they also invented the cheese press.

The collapse of the Roman empire, and the invasion by the German pillagers, Mongols and Saracens caused  the disappearance of many cheese recipes. Certain fabrication methods managed to be saved in isolated valleys or monasteries.