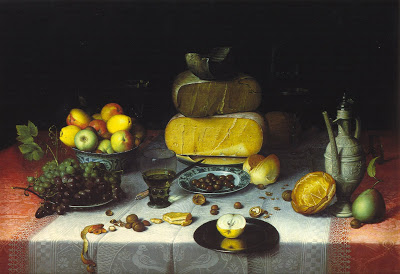 06. Cheese at the time of the Rennaissance

Thanks to the new prosperity in Europe, cheese becomes more diversified in the large urban centres.

Fresh cheeses, ‘caillebottes’ and ‘jonchées’, as mentioned by Rabelais, traditional in the region of Anjou, in the Maine and in Brittany, the cheeses of Brie and those of Auvergne all took first place in the markets of Paris. Each author classed them according to their preference: Platine de Crémone indicated those which came from Chauny, Bréhémont in Touraine, from the Grand Chartreuse and from Rosanois.

Charles Etienne in his Agriculture and Rural Life said that those cheeses of Crapone in Auvergne, of Bethune in Flanders were of top quality and reminded him of the Angelots of Normandy and the cream cheeses of Montreuil.

He gives advice on the fabrication of the cheeses: “When it comes to the way of fabricating cheese, the milk should high in fat, pure and fresh, taken especially to make cheese which can be conserved for a long time, from which neither cream nor butter should be made, the milk should come from the cow, put in vessels to curdle it and then the cheese formed” In 1393, he writes about how to choose a good cheese: “avoid choosing a cheese which is too pale like the ‘Belle Héléne,’ a ‘whinger’  like Marie-Madeleine, or one that has too many eyes like Argus. No, you should choose a cheese which is heavy and firm in the hands, with a thick rind.”

Charles of Orléans offered, in 1407, some cheese as a present to the women who he admired: “o my sweetheart I am sending you, lovingly chosen by me, this delicious Brie de Meaux- to tell you that, unhappy by your absence, I pine for you- to the point that I lose my appetite- This is the reason why I send you this - What a sacrifice it is for me!”

On the other side of the Channel, at the time of the great Elizabeth I, cheese started to appear, that of Stilton and Cottage cheese. Shakespeare, a great lover of cheese is thought to have eaten many a good portion of Cheshire cheese whilst writing Hamlet.