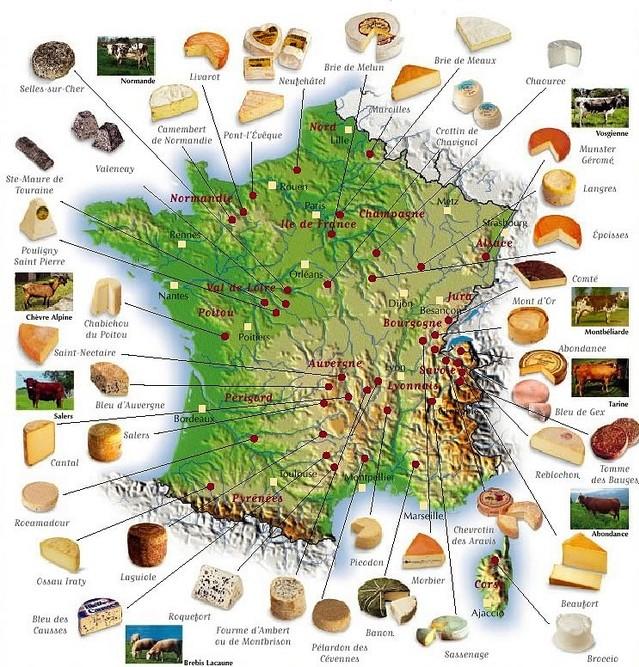 The long history, local area, notoriety and the savoir-faire all form the identity of a region.

The French Appellation d’origine controlee (AOC) – goes through the name of a region or a locality- protects imitations of a cheese which originates from this region of which the characteristics are geographical, both natural and human elements.

The objective of the AOC is to legally formalise a framework which protects the relation between a cheese and a place or a tradition. This process of protection and the element of the legacy of a certain number of cheese making productions has come about from the context of free-trade and globalisation.

In effect, it is a lot to do with a territorialisation of activity, a fixing of the area of production associated with the land settlement and a fight against the desertion of the countryside. The attribution of a protection for some, at the same time, implies the exclusion of others. When a cheese benefits from an AOC, a very strict area of protection is drawn out; outside of this area it is forbidden for the cheese to be produced under its name. Also, for cheeses like Beaufort, Bleu du Gex, Abondance or Saint-Nectaire, the process of protection concerns the process or the place of production, which is part of the diverse, evolutional and ephemeral living.

A cheese is a result of a culmination of flavours, practices, observations and adjustments which means it is a representation of how it is made, the living evolution resulting from a number of factors.

In this way, micro-organisms are a very important part of cheese making. Ferments play a crucial role in the maturing process, from the fermentation and maturing of the cheese, involving techniques which can be extremely complex, to the different stages of intervention on the living matter.

On the subject of cheese-making practices, the temperature and the length of time at which the milk is heated, the choice of the ferment, the size of the morsels of the curds, the intensity of the pressing of the pate, the treatment given to the rind, the number of times the cheese is turned and the degree of hygrometry are all parts of the processes to do with activating the micro biotic flora, which gives the diversity that we know. Mould, yeast and bacteria evolve with extreme complexity, which is mastered by the savoir-faire practices.

In this way, the living practices possess the potential of evolution and considerable variability, of what man can do. But it is also a question of the limited life of this savoir-faire: the diverse savoir-faire methods at work are what need to be preserved. Emphasis is put upon the history of these processes, whilst looking to protect a tradition or a geographical origin.

The historic anchorage of a cheese comes from the attentive identification and the minute detail of the processes of intervention and their evolution. The existence of a powerful, long history is assimilated to the authentic legacy of a cheese. Yet, a cheese must also be associated with a continuity of savoir-faire methods; the problem is that in some cases, history could be used to legitimise a process which has no real legacy, where the association comes simply from the notoriety of a place without reflecting the specificity of the product.  Certain professional groups want to pass off their cheese-making productions as being traditional, using only the fact that  this activity was able to have a historic reality.